At Connect, Meta announced support for Iron Man and Xbox Cloud Gaming, along with a new game from Saints & Sinners developers and more VR studio acquisitions.
Meta Connect brought few new announcements in VR gaming, but some old acquaintances from the gaming world made their way to the Quest 2, including streaming classic games to the Quest 2 via Xbox Cloud Gaming.
The developers of The Walking Dead: Saints & Sinners – Chapter 2: Retribution announced the release date and the new VR game Behemoth. However, nothing was heard from Meta’s big star studios Sanzaru Games (Asgard’s Wrath) and Ready at Dawn (Lone Echo). Sanzaru could be rumored to be working on a major online role-playing game, as Meta recently had the Worlds of Wrath trademark re-protected. It is likely that these games are already in development for Quest 3.
Content
The rumors about Xbox Cloud Gaming support in VR have been confirmed: The service will soon be available on the Quest platform, that is, for streaming traditional games to a virtual screen in the VR headset.
Microsoft’s CEO Satya Nadella explained during Mark Zuckerberg’s keynote that hundreds of titles could already be streamed on Quest 2 at the start of the planned beta phase. The prerequisite is a subscription to Xbox Game Pass Ultimate, a date has not been set yet. Support for the freshly unveiled Meta Quest Pro is likely due to backwards compatibility.
The Walking Dead: Saints & Sinners 2 – Chapter 2: Retribution did not get an exact release date at the Connect event. Only the release window got a bit smaller: The survival game is supposed to be released in December 2022.
In the role of the well-known protagonist The Tourist, you explore familiar and new areas like the French Quarter. According to Game Director Mark Domowicz, scenarios like this allow for multiple approaches.
The developer studio of The Walking Dead: Saints & Sinners has also revealed the new VR game Behemoth – but only with a short teaser trailer without much information.
Apparently set in the harsh snowy outdoors, the title is being developed from the ground up for hardcore VR survival, according to the studio. The game is coming for Quest and the Rift platform.
With Iron Man VR, a former prestige title from the PlayStation VR finds its way to the Meta Quest 2. The game from the relatively small studio Camouflaj was only partially convincing at the time, mainly because of the often uncomfortable flight implementation and monotonous battles in the later gameplay.
Check your inbox or spam folder to confirm your subscription.

This time Endevour One (Arashi: Castles of Sin) helps with the implementation. The game will launch on November 3 for Quest 2.
As part of the announcement, Meta also announced that the studio Camouflaj has recently become part of Oculus Studios. Furthermore, Meta takes over Armature Studio (Resident Evil 4). Already in November 2021, Twisted Pixel (Wilson’s Heart, Path of the Warrior) became part of the studio family. Meta is currently supporting this trio in bringing further “ambitious and future-oriented games to VR”.
Meta thus continues its aggressive studio expansion. Beat Games (Beat Saber), Sanzaru Games (Asgard’s Wrath), Ready At Dawn Studios (Lone Echo), Downpour Interactive (Onward), BigBox VR (Population: One) and Unit2 Games (Crayta) are also among the companies acquired in the last two years.
The acquisition of Supernatural developer Within Unlimited is currently causing issues with the US Federal Trade Commission (FTC); this is about Meta’s potential dominance in fitness VR apps.

Among Us VR release date

The viral hit “Among Us” has finally received a release date for its VR version. Starting on November 10, best friends can lie to each other in VR to cover up their secret lust for murder. Up to ten players ages 13 and up can play along on the virtual spaceship, but only with other VR players.
Executive producer Jennifer Rabbitt is already warning future players that they need to pay much closer attention to their surroundings in VR. Although the levels have been modified for virtual reality, it is much easier to surprise other players.

Population: One Sandbox brings a construction kit to Battle Royale

If you prefer to get creative in a shooter rather than social apps, the new sandbox construction mode in Population: One might be for you. An exact date for the update has not been set yet. However, some details about the content have already been revealed.
In the construction mode you can build places like a Viking village or a moon base. Experimental natures play with gravity and engage in sword duels in weightless space, for example. As in comparable editors, curated performances and various rating options are planned. 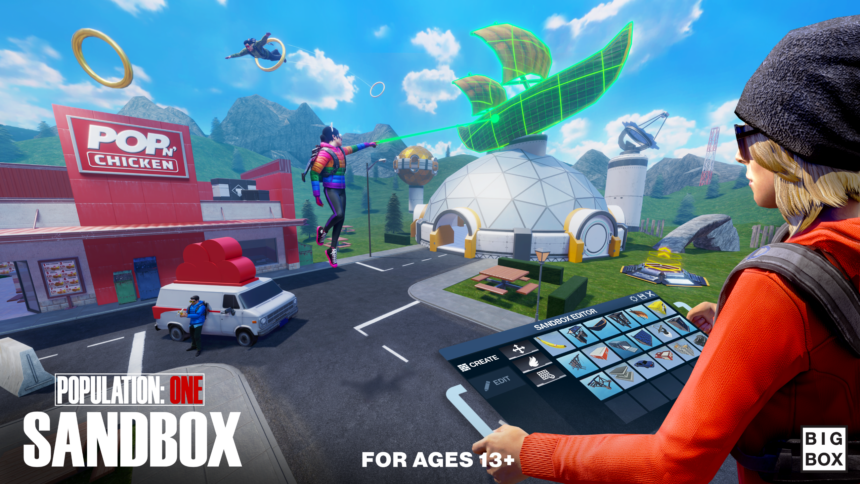 The sandbox mode gives Population: One a level editor for creative gamers. | Image: Meta
Note: Links to online stores in articles can be so-called affiliate links. If you buy through this link, MIXED receives a commission from the provider. For you the price does not change.
Check your inbox or spam folder to confirm your subscription.